Hurricane River Caverns: We are located between Harrison, and Marshall, Arkansas: a half hour either way; one hour from Eureka Springs, two and a half hours from Little Rock, and three hours from Hot Springs; and only one hour from Branson, Missouri.

In the late 1800's the property below the cave, was mined for zinc, up through World War 1. It was not a tunnel mine, but rather an open pit mine, where they kept going deeper, and deeper. Today, the zinc vein, lies beneath 20-30 feet of rubble. There is a very small cave, called Bear Cave, down there in the canyon, which is accessible to the public; which you can explore at your own risk, after signing a liability waiver. There is also another cave, across the valley from Bear Cave, being slowly revealed, beneath a bluff shelter; where volunteer diggers have been manually excavating, in the hope of being the first ones to discover the extent of this new cave system. This is a free activity, for one and all. This whole area is rich with crinoid fossils, and you can keep the ones you find.

Hurricane River Caverns is located in the heart of Ozark Mountains of Arkansas. These caverns are extensive, and still have not been fully explored. Just in the last couple of years (2011-2014 ), three new passageways have been discovered, and partially explored. Come and explore them with us, with the help of our professional tour guides. This living cave system is breathtaking, and is an unforgettable experience.

Hurricane River Caverns offers a regular self-guided cave tour, and three extreme wild cave tours for adventure seekers. Our cave tours, follow multiple serpentine trails, of an ancient underground aquifer, whose many branches, converge at the cave entrance, and become known, as the Hurricane Branch, which winds up in the Buffalo National River: our most famous local attraction.

Our regular self-guided tour ( available at our discretion ) is open daily, and no reservation is needed. For an extreme wild tour, call or email the Hurricane River Caverns now, for a reservation! Our extreme wild caving tours are often, a once in a life time experience. These cave tours will undoubtedly test your courage, and endurance. Our extreme wild cave tours usually last around 3 hours, for groups of under 10 persons, or up to five hours, for groups of up to 25 persons. For these wild tours, we provide safety equipment, such as caving helmets, headlights, knee pads, and gloves, to maximize the safety of our visitors.

We are located in northwest Arkansas just off of highway 65, halfway between Harrison and Marshall, and about an hour from Eureka Springs, Arkansas, or Branson, Missouri; two and a half hours from Little Rock, and three hours from Hot Springs, Arkansas. Look us up on Facebook, under "Hurricane River Cave", for lot's of exciting posts.

Lots of video clips available on our Facebook page

Check out this Channel 5, CBS affiliate, 3 part documentary, out of Fort Smith, Arkansas: 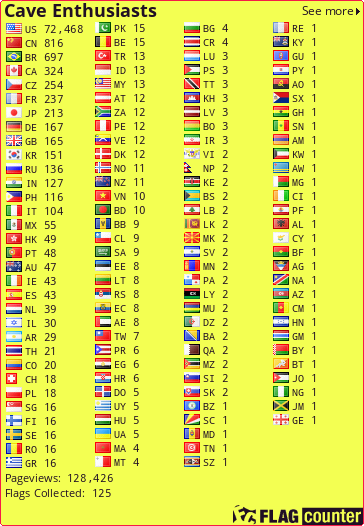 From the South:
Take 65 North in Conway, AR to Hurricane River Cave

From the North:
Take 65 South in Springfield, MO to Hurricane River Cave

OPEN DAILY
From 9:00 AM
March through October
We are usually open during the Winter

The cost of these extreme cave tours is $89.00 per person, plus state and local taxes: currently at 9.5 % . Group rates, and family rates, are available. Go-Pro HD video footage is available for $30, if you bring your own flash drive that has at least 16 gigs of storage.